By continuing to browse this site you are agreeing to our use of cookies. Find out more on our Cookie page. 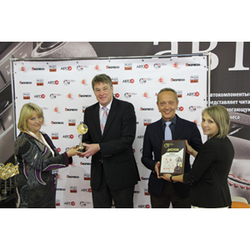 Corteco was honored with the award “Brand of the Year” during this year’s MIMS in Moscow. In August of every year in the Russian capital, “MIMS powered by Automechanika Moscow” opens its doors to manufacturers, suppliers, service providers and customers from the independent automotive replacement parts market (IAM). The trade fair was held for the 16th time in 2014 – for four years in cooperation with Automechanika, which draws visitors to Frankfurt during September.

On August 26, the company received the Brand of the Year 2014 award during the event. Two platforms are available where industry experts and drivers can choose the  Brand of the Year as part of a Russian Transportation Ministry project. "In the Russian market, the award has been considered extremely important for years”, said Reiner Martsfeld, Corteco's chief commercial officer. Previous award winners have included many well-known companies, such as the Schaeffler Group, Bridgestone, ContiTech, Bosch and many more.

For automatic transmission and power steering:

Worldwide specialists rely on this technique.
And with very good reason.

The vision of a frictionless seal

something that our engineers at Freudenberg Sealing Technologies have come close to achieving with the LEVITEX crankshaft seal.

Corteco around the world

Corteco is represented in over 15 countries. Through the Freudenberg Group, we reach customers worldwide in 60 countries.